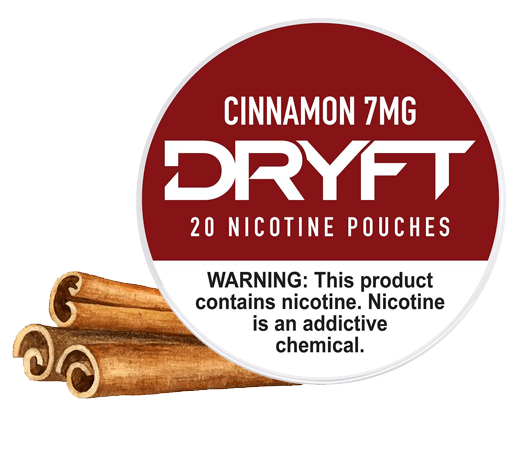 The sweetness isn’t too over the top, but it does compliment the spicy element of the cinnamon taste.

Snubie
Nicotine Pouches, Dryft
The flavor of Dryft Cinnamon is a present taste of cinnamon; it is slightly spicy in nature and has a light touch of sweetness.

Dryft is a nicotine pouch product made in Sweden that contains no plant matter, is smokeless, discrete, fresh, and spit-free, and does not require refrigeration. Dryft is used in the upper lip, and the manufacturer says it can be used for up to 45 minutes. You may be asking yourself what's in Dryft, as this is a tobacco-free product. Dryft pouches contain a chewing gum base and tobacco-derived nicotine. While the nicotine is tobacco derived, it doesn't contain any tobacco plant matter in any way - left, root, stem, etc.

A can of Dryft weighs 7.5 grams and contains 20 pouches at 0.375 grams per pouch. Dryft products are available in two nicotine strengths - 2mg and 7mg.

Dryft comes in a small, round can which is translucent - which I think is pretty neat. They fit quite well in the pocket and are smaller than your regular snus or dip cans. There is also a compartment on top of the lid where you can discard of your used pouches if you aren't near a trash can! Dryft Cinnamon 7mg is said to have "a spicy flavor of cinnamon in a smaller white pouch”. This product has a mild, spicy smell of cinnamon. It isn’t overly sweet, however. The pouches themselves are quite dry to the touch, but as they get more moist they do get more comfortable in the lip. As they start out dry, you will find these have a long lasting flavor in the lip. The flavor of Dryft Cinnamon is a present taste of cinnamon; it is slightly spicy in nature and has a light touch of sweetness. The sweetness isn’t too over the top, but it does compliment the spicy element of the cinnamon taste. To compare them to a snus product, they feel similar to a regular snus. For non snusers, this means they are going to be on the higher end of nicotine delivery. I find Dryft products, on average, last about 30 minutes in the lip.

Dryft comes in a lot of exciting flavors like Black Cherry, Cinnamon, Citrus, Coffee, Dragon Fruit, Peppermint, Spearmint, and Wintergreen.  If you're looking for a product that has nicotine but not tobacco and is discrete to use anywhere, anytime, give Dryft a try!