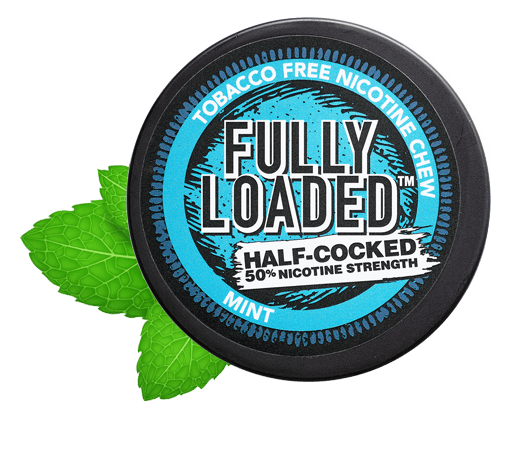 Fully Loaded Chew is a product that contains nicotine but is tobacco free!  Lately, we’ve seen a lot of manufacturers finding new ways to deliver nicotine that are similar to smokeless tobacco, but with products that don’t contain tobacco.  Fully Loaded Chew says their product feels, looks, packs, and tastes like tobacco, but without the tobacco.  It is made of arrowroot and mint leaves.

This one is said to have a “bold and icy mint flavor”.  The aroma of Fully Loaded Half Cocked Mint seems like a mix of mint and menthol.  It’s fresh smelling, and not overly sweet, either!  The material itself (as I'm not sure what to call it since it isn't tobacco) is moist to the touch and feels a lot like long cut dip.  It was surprisingly easy to pack in the lip.  This one has a fresh feeling and the lip, and a pretty refreshing taste!  It seems to be, like the aroma, a mix of mint and menthol.  It has a touch of sweetness to it, but it’s not overly done.  When it comes to the nicotine strength, this one is the "Half Cocked" version, which is said to have 50% nicotine strength.  I felt a little nicotine from this one, but it’s not too over the top or anything.  The flavor, on average, lasts about 30-40 minutes!    If you’re looking for a product to replace your mint dip, this would be something good to consider!